Nelson Mandela was a civil rights leader in South Africa.  He fought against apartheid, a system where non-white citizens were segregated from whites and did not have equal rights.  He served a good portion of his life in prison for his protests but became a symbol for his people. Later he would become president of South Africa.

Nelson Mandela was born on July 18th 1918 in Mvezo, South Africa. His birth name is Rolihahla. He got the nickname Nelson from a teacher in school. Nelson was a member of Thimbu royalty and his father was chief of the city of Mvezo. He attended school, college and then later University. It was here that he got his law degree and where he met some of his fellow activists against apartheid. 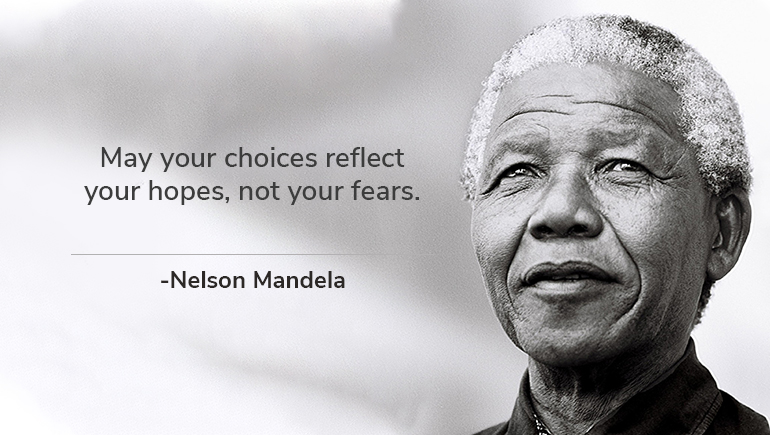 Nelson Mandela became a leader in the African National Congress (ANC). At first he pushed hard for the congress and the protesters to follow Mohandas Gandhi’s non violence approach. At one point he started to doubt that this approach would work and started up an armed branch of the ANC. He planned to bomb certain buildings, but only the buildings ensuring no one was hurt.  He was classified as a terrorist by the South African Government and was sent to prison.

Mandela spent 27 years in prison.  His prison sentence bought international visibility to the anti-apartheid movement.  He was finally released through international pressure in 1990.

Once released from prison, Nelson continued his campaign to end apartheid. His hard work and life long effort paid off when all races were allowed to vote in the 1994 election. Mandela won the election. And became president of South Africa. Nelson was a strong force in keeping the calm and preventing civil war.

Mandela wanted all people of all races to have equal rights in South Africa.

Nelson Mandela is a great role model because he stood up for what he believed was right - Everyone, no matter what colour their skin, deserve to have equal rights.